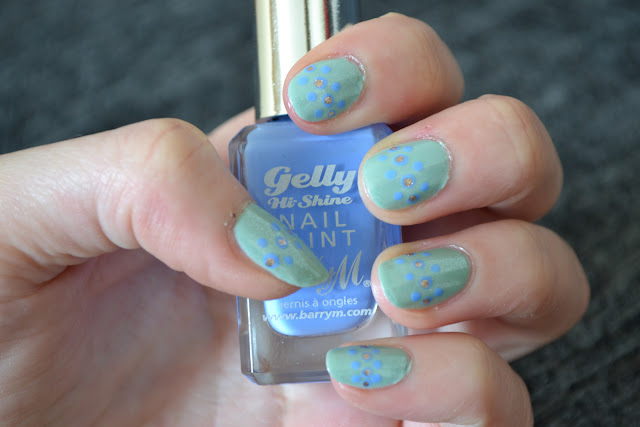 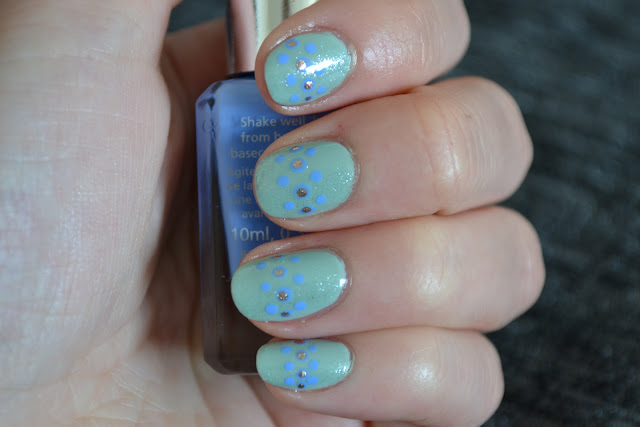 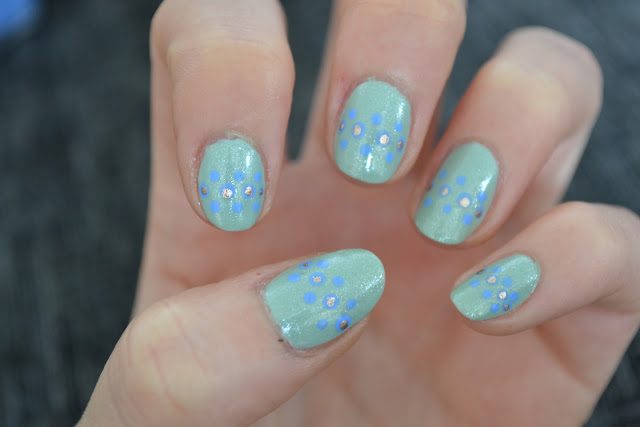 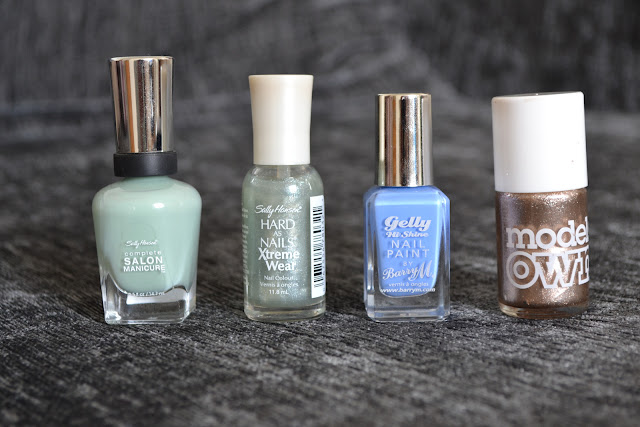 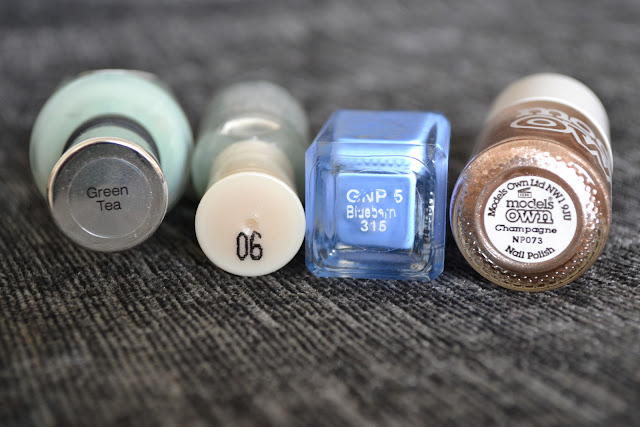 In order to try and easy myself back into the old nail art swing of things after a while of being very lazy with my nails, I thought I would start with a simple dotted design.

I used Sally Hansen 'Green Tea' for the base. I went over that with a sheer shimmery polish also from Sally Hansen but it doesn't have a name only a number. I hate it when nail polishes don't have names and just to add a bit of confusion I don't know if its number is meant to be '90' or '06'!

With a dotting tool I added some dots with Barry M's 'Blueberry'. I was going to leave it at that but the colours got a bit lost together so I added a tiny bit of Models Own 'Champagne' on the middle row of the dots.

This is an incredibly easy design to do but I think it looks quite fancy! I want to try it with some other colours, maybe some that are little more contrasting, just to make it stand out that little bit more.

Outfit | Back to Basics 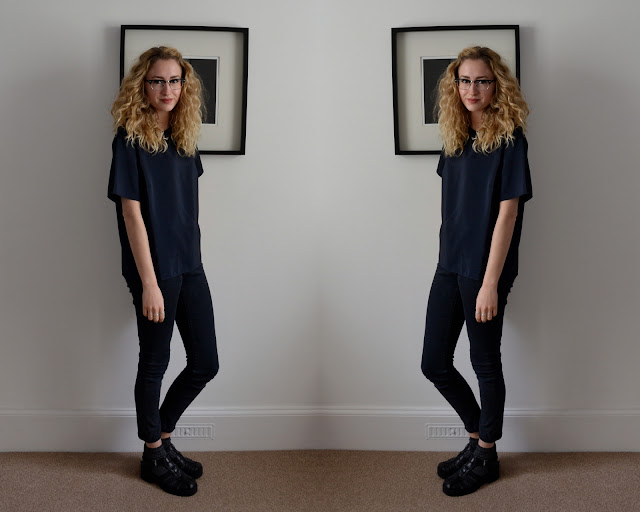 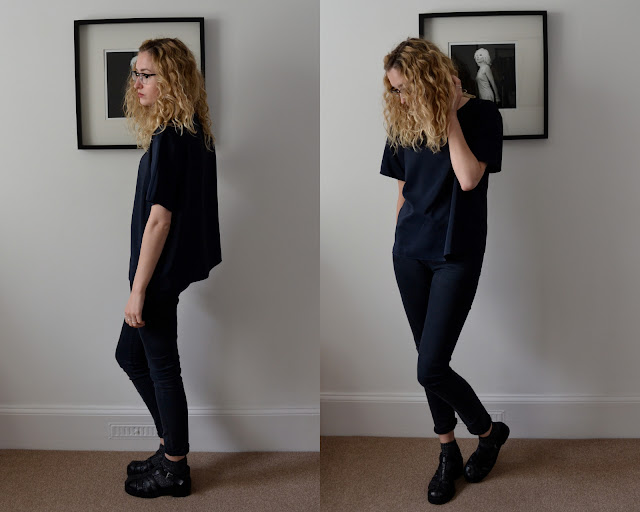 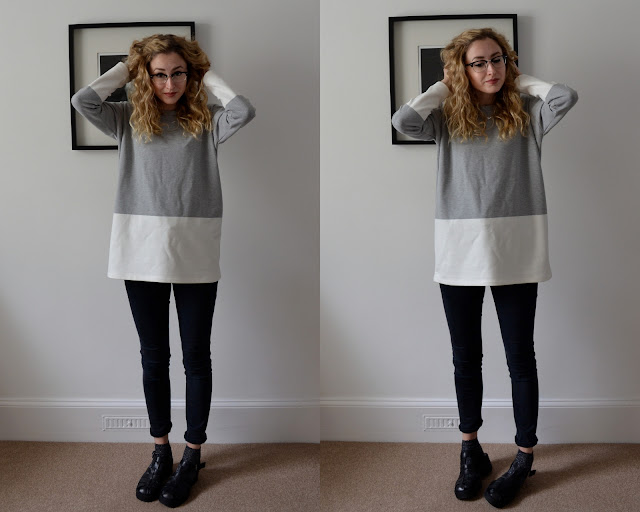 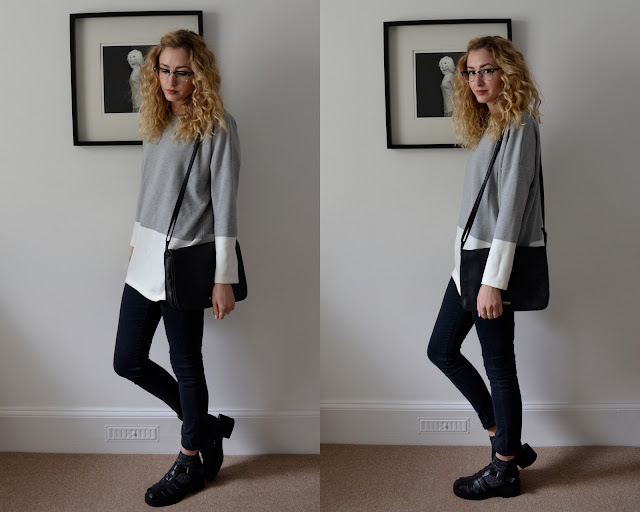 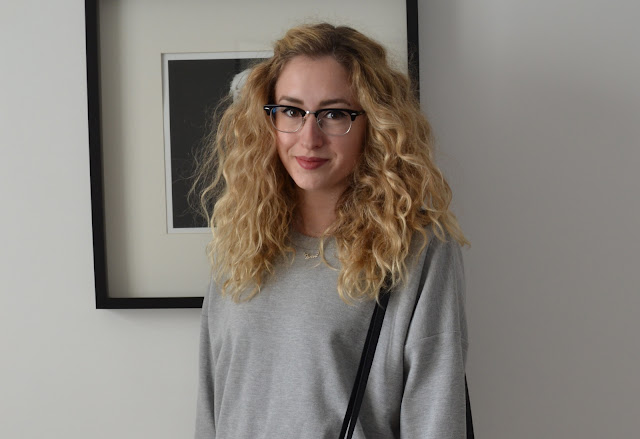 Its raining and it is nearly June. How flipping depressing.
Any nice summery outfit ideas I may have had have gone right out the window. When the weather is this rubbish I tend to revert back to my staple uniform of jeans and a baggy t-shirt.
Its more than a little dull but if it aint broke dont fix it! 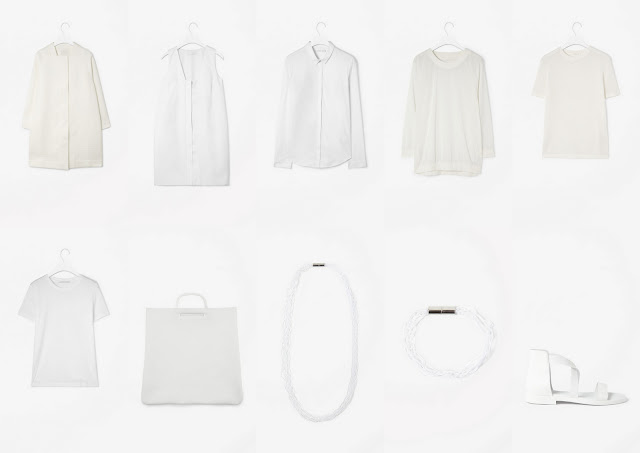 In my eyes Cos can do no wrong. It is by far my favourite shop on the highstreet. Its not the cheapeast so I don't own as much of it as I would like but I always find myself drawn to their simple pieces and clean shapes.

At the moment I want everything to be white. It is probably the least practical trend that has ever existed. Especially when it comes to shoes.
White pieces paired with my clumsiness, penchant for spilling things and general lack of elegance, mean they don't usually remain white for very long.

Also fuelling my desire to give an all white outfit ago is a blog called 'Love Aesthetics'. If you aren't already following then definitely check it out. I am quite literally in awe of her style. 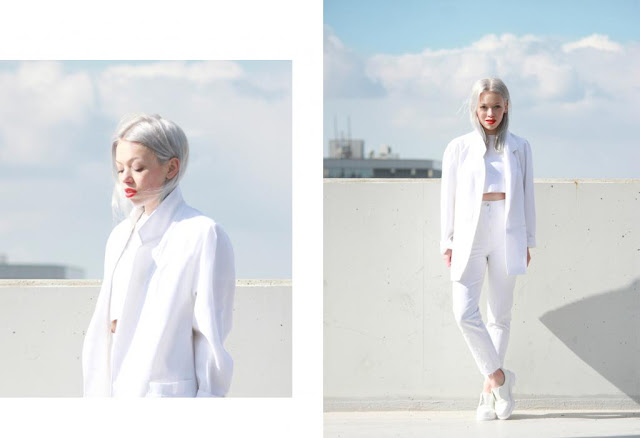 Doesn't she look amazing.
I could only dream of being as put together as Ivania! 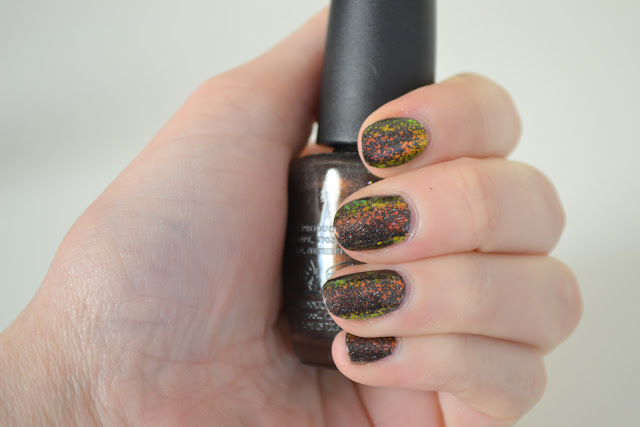 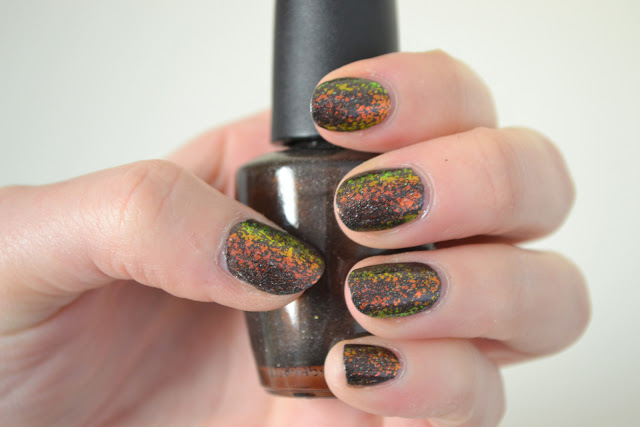 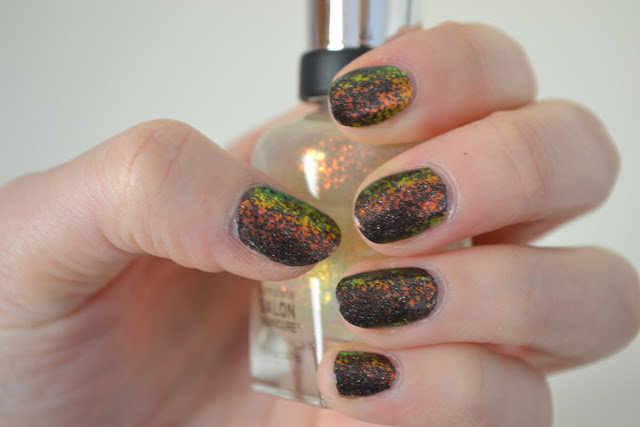 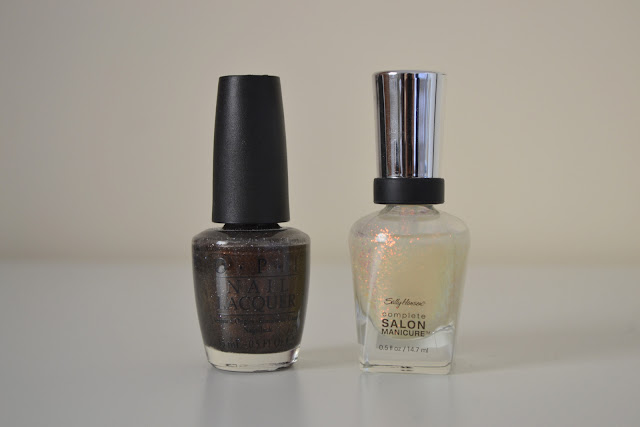 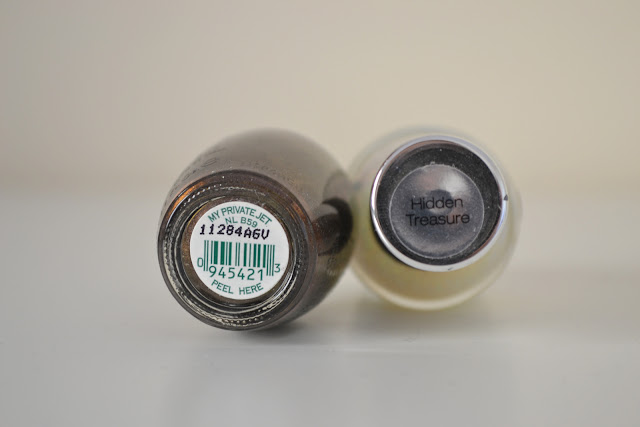 As you may have noticed posts have been a little thin on the ground here lately. Hopefully things will return to normal after the next week or so but thanks for sticking with me!

Doing my nails has also taken a but of a backseat, an interesting top coat is about as far as I will stretch in the way of nail art at the moment. And when I do, Sally Hansen's 'Hidden Treasure' is my current go-to.
It livens up pretty much any darker toned polish. While you can still see its iridescence on more pastel shades it definitely stand out agains a black or in this case dark brown base better.

This time around I opted for OPI 'My Private Jet'. I have been guilty of overlooking this little gem of a polish for a while but after doing these nails it reminded me how nice it can look.
To make things slightly less boring I added the topcoat. It reflects slightly different colours depending on the base coat but these ones ended up looking like some sort of snake or beetle with red, gold and green tones.

This particular polish isn't the easiest to track down. I purchased mine from eBay quite some time ago.  And sine I haven't seen it come up again for a reasonable price.
But there are many other similar polishes avalible. I have the 'Gemstone' topcoat by Andrea Fullerton at Superdrug and Look Beauty also have a couple of options. The 'Pearl' or 'Sequin' effect polishes aren't as densely packed as the Sally Hansen version but they are far easier to get your hands on!

China Glaze 'Luxe and Lush' also deserves an honourable mention. I have it and have used up more than half. Quite a rarity for me.
Its not the same sort of formula as 'Hidden Treasure' but it gives a great effect but with more chunky iridescent flakie pieces.. You can get your mitts on it from eBay (where I got mine) here.

I want to get back to doing fancier things but for now flakie topcoats are my saviour. 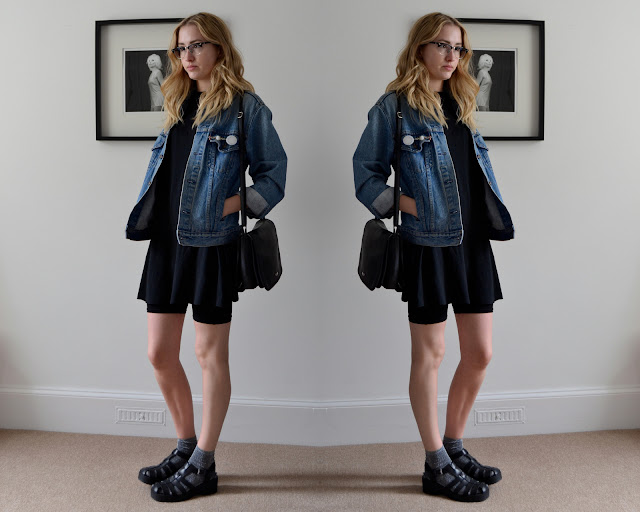 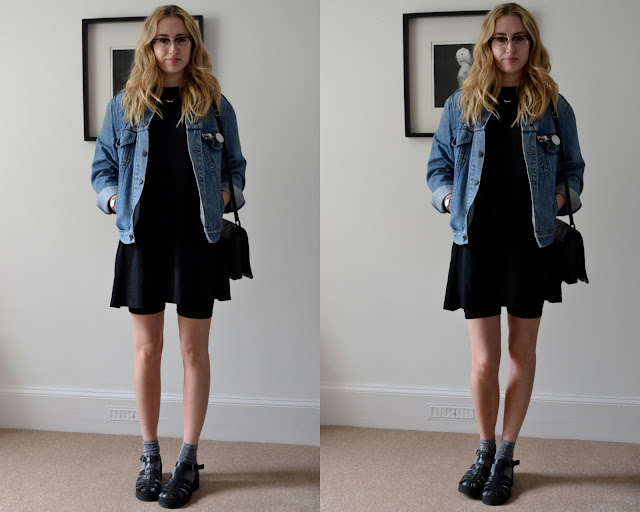 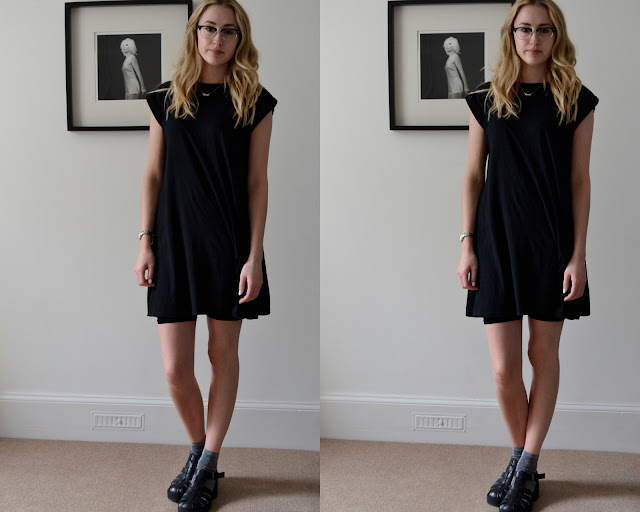 
I just got home from uni, my last project is raging on but the end is in sight. I will almost have a life back!

Today I managed to grab my boyfriend and force my camera into his hands in time to snap these pictures before he had to go to work. I do have a tripod but with no remote, self taking pictures can take an absolute age. So I'm always pestering him for help.

As outfits go this is rather simple but its my first outing of my new cycling shorts. Its not as hot as it has been but I still felt compelled to get my legs out in celebration.
I paired them with this rather old dress from H&M. I bought it a couple of sizes up, took off the the pocket on the front and now wear it backwards like this!
I wore my trusty old denim jacket to keep the wind out and threw on my Aldo sandals. You cannot keep these off my feet. I have been wearing them pretty much everyday since I bought them and I'm sure they will be my staple summer shoe.
Pricey but I'm glad I made the investment.