A Closer Look | Products for My Naturally Curly Hair 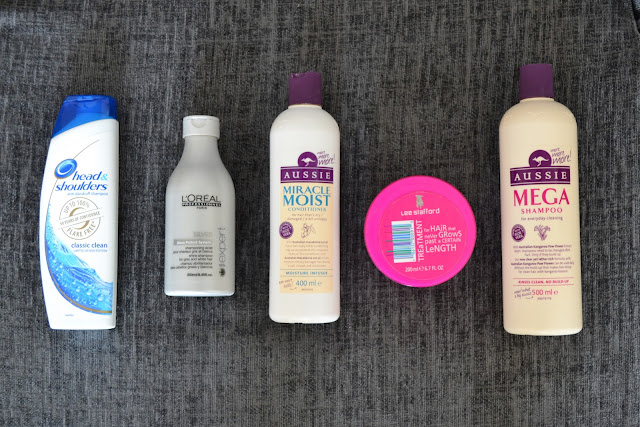 
When it comes to shampoo's and conditioners I am not overly loyal. I much always use a silver shampoo and dandruff a shampoo for my not so glamorous sometimes dry and flaky scalp. I tend to buy something differnt each time I run out as to be honest I've never found anything that works much better than the rest.
The same can be said with conditioners. I tend to just pick up whatever. With the slight exception of the Lee Stafford Hair Growth Treatment. But even then I only buy this when its on offer!
Its pretty regularly involved in some sort of promotion but if not I won't rush out to buy it full price. I wouldn't say it makes or has made my hair grow any quicker but it does improve the feel of my hair. When I use it it feels softer and less frizzy. 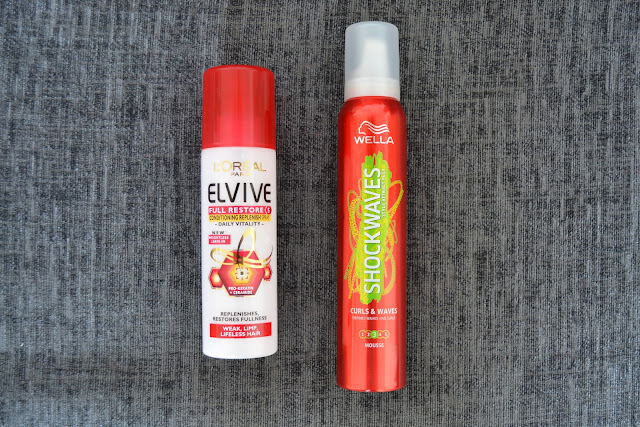 I have been using this combination of products for years. I'm talking since I was 11 when I started using products in my hair!
I have always used some sort of conditioning or detangling spray. When Lo'real discontinued my favourite one I just moved over the the next most similar thing that they made.
I have always always used this Shockwaves mouse. It costs less than £3 and does what it says it will! It doesn't leave my hair crunchy and helps keeps my curls under some sort of control. 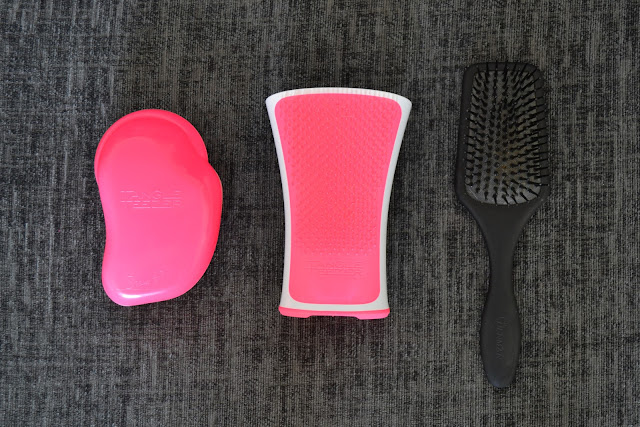 Another item I am now very loyal too is the tangle teezer. For me its the easiest way to deal with the utter ordeal that is brushing my hair. I use the tangle teezer to (very slowly) brush out my hair before I wash it. It removes all the knots, tangles and general matted texture that my hair as acquired by the 3-5th day post wash.
Since discovering my love for the tangle teezer I also purchased the Tangle Teezer Aqua Spalsh which is specifically designed to be used with wet hair. If I suddenly lost it/broke it/didn't have it anymore for any reason I wouldn't be heartbroken but it is another useful tool to have in the battle against my unruly curls.
I also have an old paddle brush with I use more after I have brushed out all the tangles when its wet or when straightening my hair. Again only after I have used the tangle teezer. 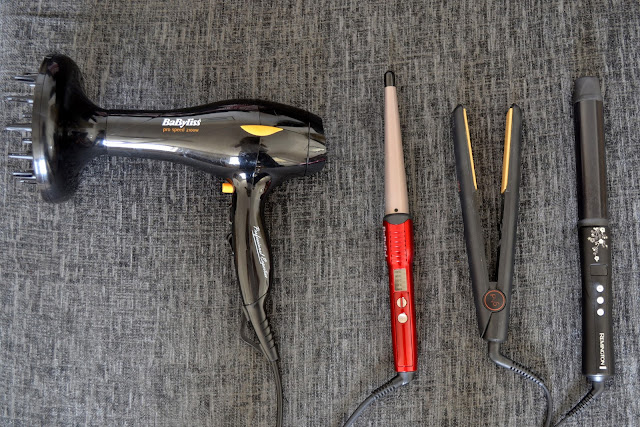 
I only bought this hair dryer as it came with a diffuser attachment. My old one got recalled and this was the only one my boots had that that I could exhange it for. It's good and does the job. I don't know what more can you really say about a hair dryer?!
I am a little more picky with my other heat styling tools. I have recently started curling my hair when it is already in its naturally curly state with the Babyliss Curling Wand. I use it just to go over my curls and make any straggly ones look like they have a bit more life in them. It heats up to 200 degrees and the curls don't tend to drop out.

To straighten my hair I use my trusty old GHD's. These are my second pair. My first ones lasted a good 5 or so years of intensive use before I dropped them from a considerable height and cracked the plastic casing surrounding the plates.

Lastly I have a fairly new addition to mention. I have only had the Remington Pearl Pro Curl Curling Wand for about 2 months but I don't know how I managed without it before. I only use this on already straightened hair as the barrel is far to large to mach up with my natural curl pattern.
When I do wear my hair in any kind of straight style I like to add loose waves. Previously I was using my Babyliss conical wand but it just wasn't achieving the look I was after. The Remington Pro Curl has a much larger barrel so it creates soft loose waves really easily.


That covers everything I use on my head! I obviously favour cheap haircare and when something works I tend to stick with it.
If you have any recommendations please do let me know.
I also have a video on all of these so if you want to see me chatter away about them check it out below!