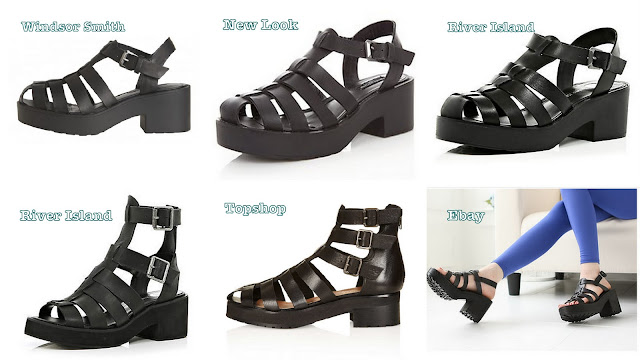 
I have the Aldo Wanette sandals and I know they haven't been the easiest for people to get hold of. As far as I know they are sold out on the Aldo UK sight. I am unsure of their availability in stores but I have been told they are few and far between.

I have found a few shops selling pretty much the identical shoes. I haven't seen any of these in person but in comparison with my pair in pictures they look pretty good.
A lovely reader of mine left me two of these links so you have Neeny to thank for this post. Doing a bit of research I found a couple of other options to add to her list.

If you are in Australia there is a site called 'Windsor Smith' selling them as the 'Lily' Sandal. In a pretty wide variety of colours compared to what was available at Aldo.

If you are in the UK then New Look is your saviour. They have them for half the price, which kind of pains me but I think they were worth the £72 I paid back in April regardless. They are on the New Look website for £39.99.

River Island also have a version for £55. They have a slight variation as well with straps that go up the ankle which can be found here.
Again with a similar style are 'Topshop's Aladin Gladiator Strap Boots'

Ebay Also Have this offering. Not exactly the same but still resembles them somewhat but with a slightly higher heel.

Hope this helps out any of you who have been dying to get your hands on the Wanettes!